I slept in til noon.  I woke up and the cat was lying on my head.
I didn't feel like doing anything, even told Becca that I was going dark for the day.

I grabbed some cheap paper and was going to make an angry face.  I started vibrating and decided to just get it out.  Turns out, I couldn't.  This is what happened.  I guess things aren't too bad. 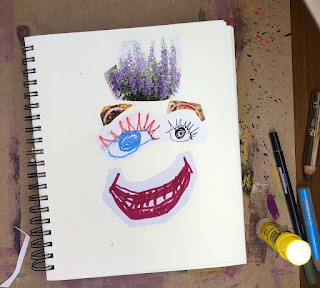 This is what I started with.  I drew a bunch of eyes, mouths and noses. 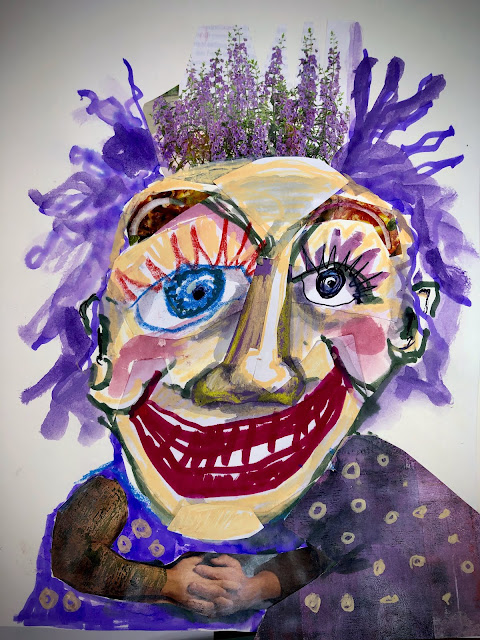 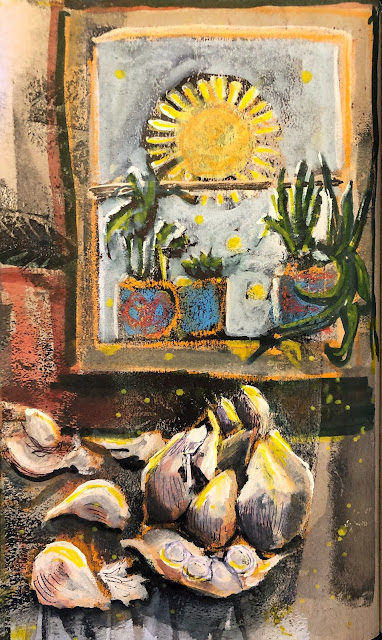 I'm such a loser, I celebrated National Garlic Day today.  I've reached a new low.
To further expound on my pathetic life, I will list my three top garlic memories in honour of the clove.

1.  I remember having an argument with Jacob at the cottage and he was so angry I thought he was going to slug me.  His face was red and his neck got blotchy.  He said, "Come here".  I followed him to the kitchen.  He opened the fridge took out the jar of minced garlic, and grabbed a spoon.  He scooped some out, stuck it in his mouth, and mushed it around.  Then he grabbed my shoulders and went "AHHHHHHHHHH"  and breathed in my face like some Italian dragon.  I fell on the floor laughing.  I can't remember what we were fighting about, but it was quickly resolved.

2.  Roasted garlic used to give Grandma Kay gas.  Once, after a particularly delicious caesar salad, she turned to me and said, "Don't worry, I've trained my farts to go in the corner."

3.  Simon and Cheri were cooking supper together one weekend.  Cheri was slowly chopping garlic cloves, and Simon grabbed the knife and said, "That's not how you do it. Watch me."  He went to smash the clove with the side of the knife, but it slipped and went flying through the air and stuck RIGHT to his forehead.  We held back our laughter, but he was furious.  He took that knife and flung it down with all his force. It stuck upright into the floor with a boyoyoyoyoing.   We froze.  That was the night of the big fight and when CFS told me I was going to move again. 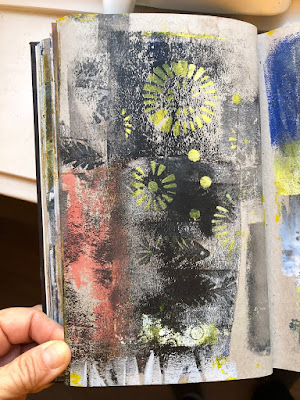 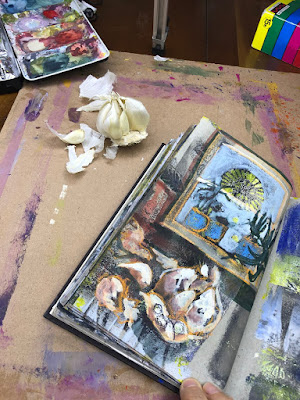 I felt kind of empty all day.  It was grey and cold and I started feeling anxious about what's going to happen to me when this Covid thing is done.  If I never had to do anything, that would be fine.

I lay on the couch like a lump and started watching the Lady Gaga Together At Home special.  Most of the artists were old has-beens.  I thought of how Grandma Kay would have loved it.  Except for Celine Dion.  She couldn't stand her.  She used to do an awesome parody of her performing.  It would crack me up.

I grabbed my sketchbook and started drawing.  Blind contour, semi-blind, fast fast fast.  At one point, I realized I was drawing in time of the music... like I was conducting with the flow of my pen.  Maybe the pen was doing interpretive dance.  Whatever it was, I enjoyed myself. 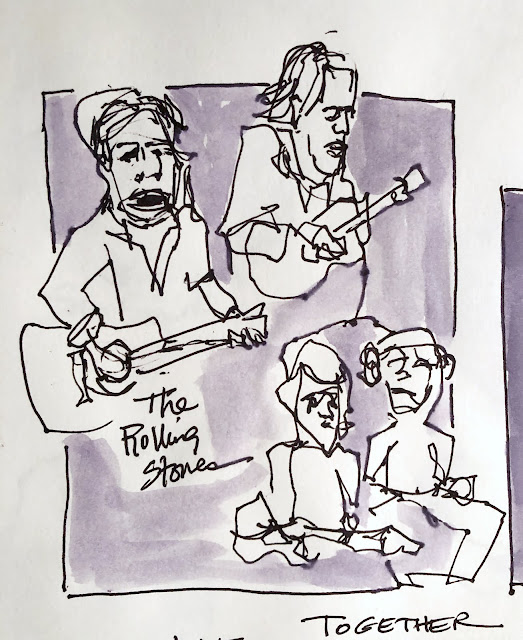 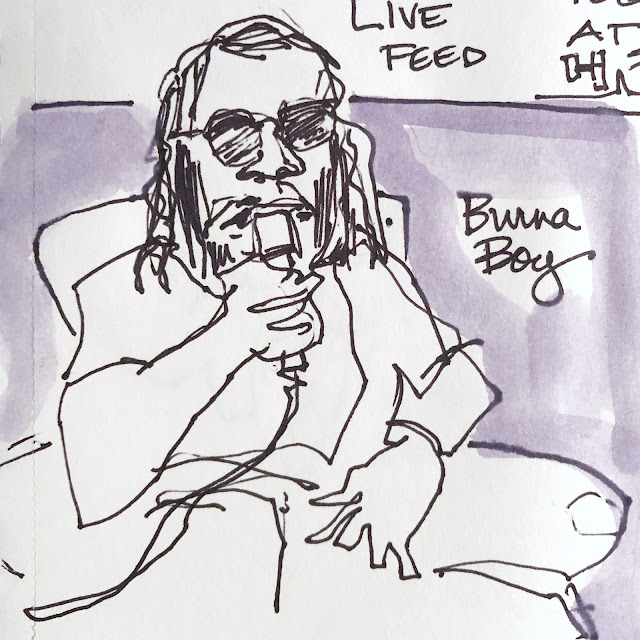 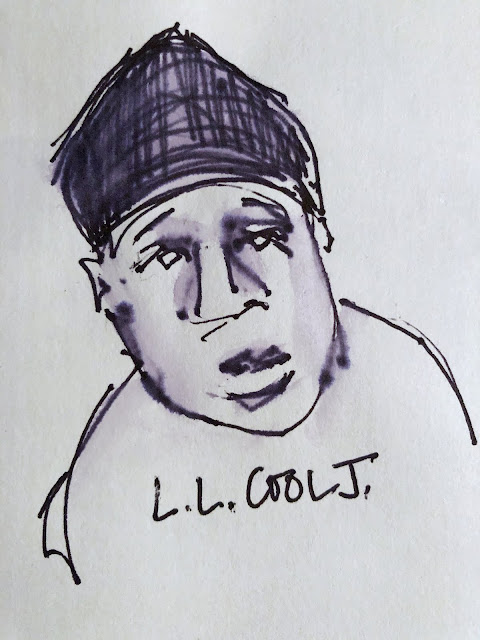 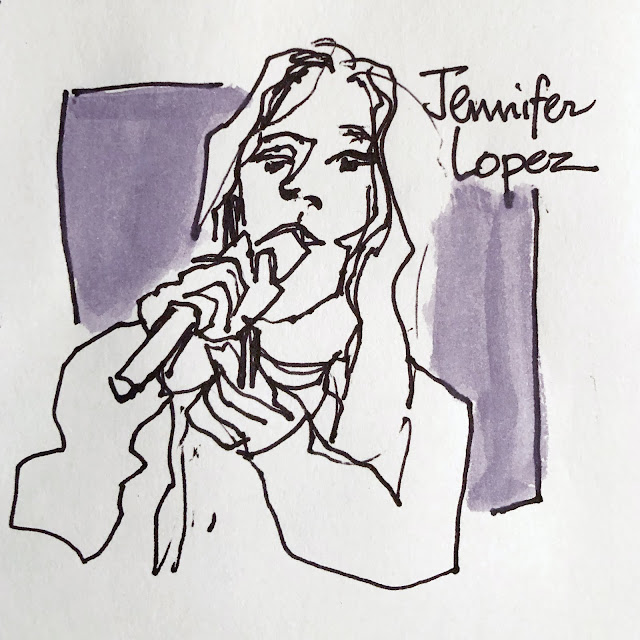 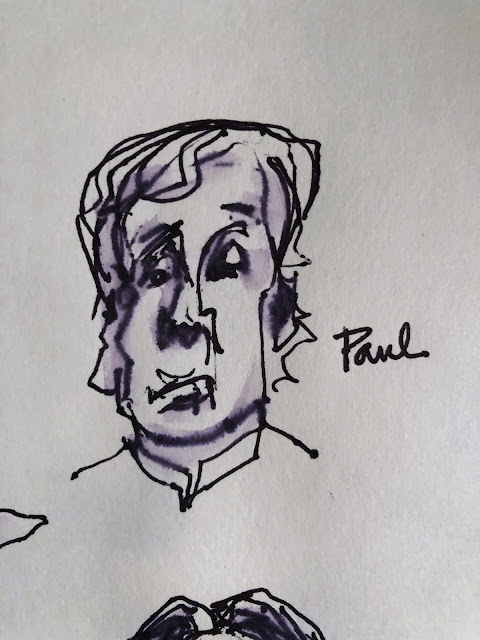 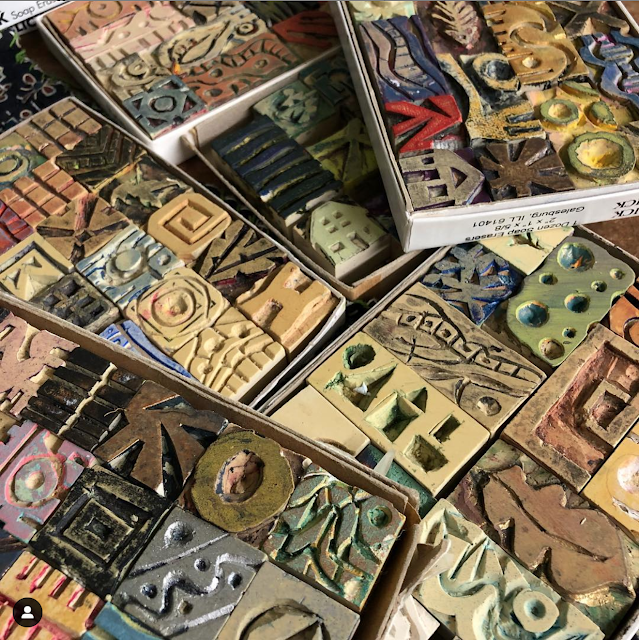 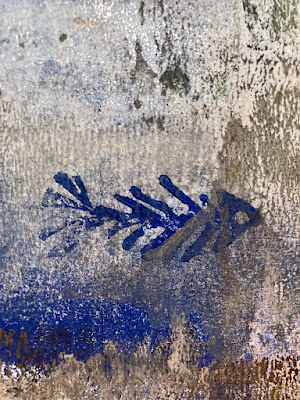 I had preprinted some sketchbook pages in my journal.  Grandma and I used to do that.  We'd make monoprints by smearing acrylic paint and printing textures with a gel plate. I have the box of stamps that she and I carved.  I had brought them with me here in January because I hoped to use them.  I cracked them open yesterday.

One Christmas, she gave me my present on Christmas Eve.  It was a box of erasers and an X-Acto knife.  Mom went nuts.  "Fer God sake, Kay. She's only 10. She's going to spend tomorrow in emerg. Those are way too dangerous".  I always thought it was strange that my mom called her mother by her first name.  Anyway, Grandma and I spent the evening carving stamps and then all day that Christmas, stamping patterns and designs.  She taught me how to make a repeating pattern.  I kind of forget how.  Maybe I'll hit Youtube later.

She had carved a skeleton fish stamp. It was the first thing I saw when I opened the box. My stomach turned a bit, but as I was going through them all, I kept going back to that one.  I had used it so much I had worn away a few of its bones. I laid down a bit of colour and stamped it on the page. Tonight, I went back to the page and drew around them. I'm not really happy with the picture, but who cares. 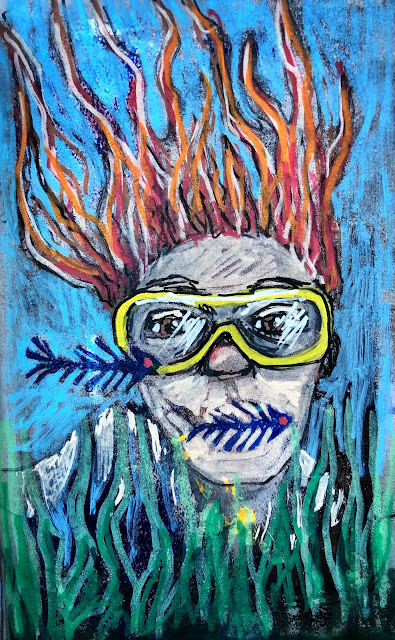 Sometimes when I draw, I hear Grandma's voice faintly saying things like "wow", "Way to go", "I never would have thought of that". It makes me feel sad, but kind of like she's hugging me.
Posted by Heidi at 5:52 AM 1 comment: 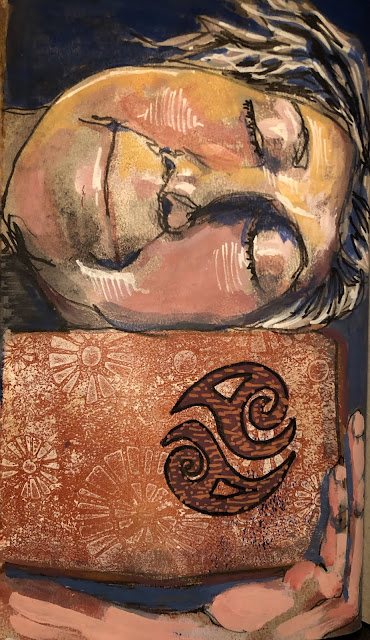 There's a picture on the fridge that I can't figure out.  I assume it's some meditation thing that Heidi is into. She sure has some weird stuff around the house.  There's a little sign in her half dead jade plant that says "Please repot me. Signed, The Plant".  There are giant pinecones beside her woodstove and a walrus skull on her coffee table.  Artists are cool, but weird. 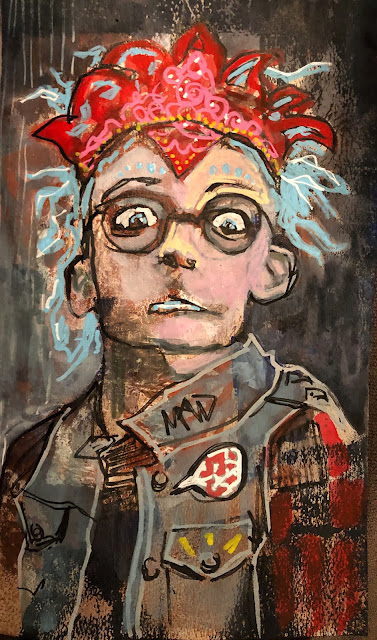 One of the perks of this house-sitting gig is Heidi's studio. I went out there today and did some monoprinting with the gelli plate. She had told me to use the space as much as I wanted, but I've hardly gone out there these days. This morning, I thought I would try keeping an artist's schedule and put in some studio time each day. There was a note for me on a green tub of printmaking supplies, "Have fun, Nori."  I have to admit, I did.

It's Becca's 18th birthday tomorrow.  I had nothing for her, and the dollar store isn't even open these days. I drew her face on top of one of those printed pages and gave her a crown. 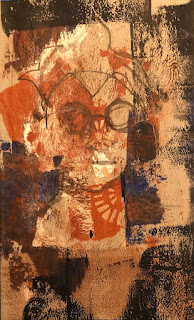 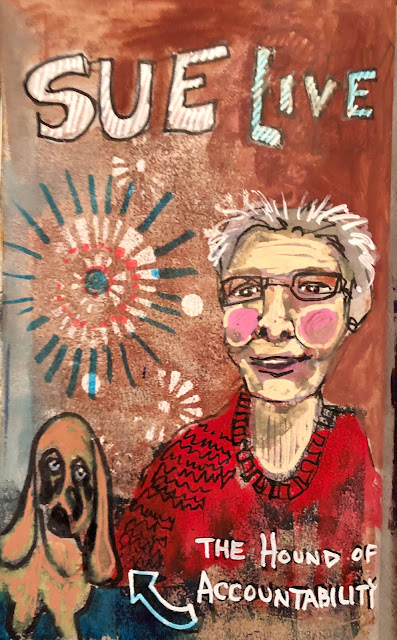 Grandma Kay had a whole bunch of wacky artist friends. They used to go on an annual road trip to the Minnesota State Fair.  They'd pile into the Peugeot with a cooler full of frozen meatloaf sandwiches, junk food and Diet Dr. Pepper, and meet their friend named Sue at the fair. They'd all come home with their sketchbooks filled with drawings of animals, people in sunglasses, and little snippets of writing.  Sue is an artist in Stillwater who draws and paints bears.  Her work is awesome. 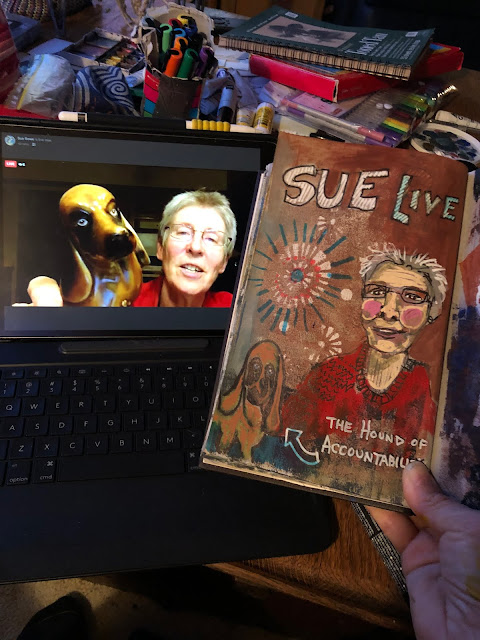 She friended me on Facebook after Grandma Kay died and she's always sending me photos of her daily mandalas.  I never really go on Facebook, but I was so bored that I was looking at different art groups and it popped up that she had gone live. So I clicked. 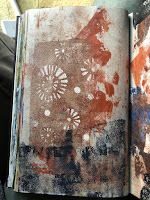 OMG. I laughed. It was the perfect thing.  She was showing her sketchbook from the State Fair 2015.  I couldn't believe it.  She told about a beauty pageant for cows where first prize was a purple folding chair.  I remember hearing that story from Grandma.  She was so surprised to see me.  While she was showing us her ceramic "Hound of Accountability", I drew her. It was so fun.

I had stenciled in my sketchbook this afternoon, so I thought it was a pretty fitting page for Sue since it already had a built in mandala.