It snowed today.  I can't believe it.  It's April 15 and I am so sick of winter, I could scream.  I got to Dr. E's early and there was a note on her office door saying she was away due to unforeseen circumstances.  I immediately thought...  she's dead. She was in an accident on her way to work and was in the hospital.  A wave of panic rushed through me.  I thought of going to Emergency to see if she was there.  Then I remembered that she mentioned living in a small town, so probably she couldn't make it in to the city due to bad roads.  But then, why didn't the note say due to weather?  What kind circumstances were unforeseen?  I imagined her calling in sick and taking a mental health day.  Yeah, a mental health day at the cost of MY mental health.  I'm so glad I had my sketchbook in my bag.  I should have gone right back to school, but instead, I wandered to the park and watched the ice breaking up on the river.  Huge chunks were grinding and bumping the shore as they were swept along with the current.  I saw a picnic table float by and imagined the picnickers and their basket at the bottom of the river.  I crunched some puddles on the muddy path and when I got to the edge of the forest, I leaned against a fence and drew.  It was quite nice.  Grandma Kay would have commented on the looseness of my line and the thickness of the pen in the foreground.   When I got home after school, I added some gouache for the sky.  I left my book standing open on my bedside table so it would be the first thing I'd see in the morning. 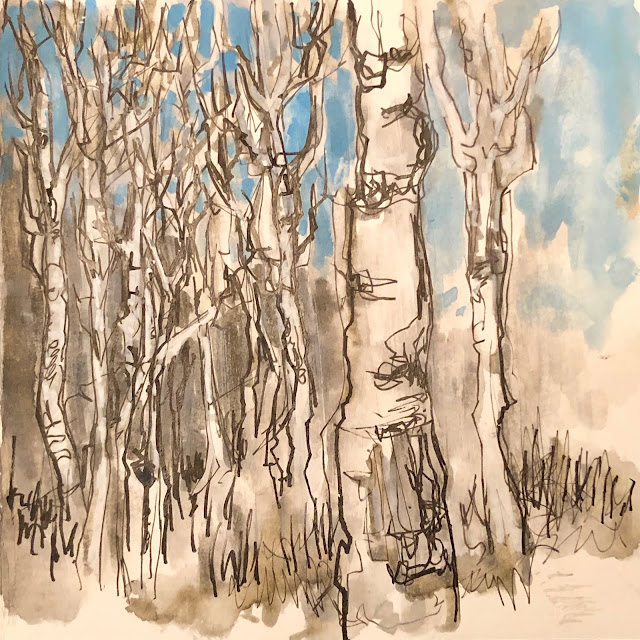